Mitchelstown CBS Primary school have had a very successful last few years on the quiz circuit.  There were 27 of us on the quiz panel this past year.  Every Thursday after school we trained for 1 hour, learning about topics literally from A to Z, from animals to the Zodiac and a myriad of subject matters in between.
​
We worked very hard and travelled to many exotic places, from Glenbrohane to Ballyhooly, Shanballymore to the RDS in Dublin.  Having entered over 25 quizzes in the last 2 years, we won each and every one of them with the exception of the Credit Union Chapter Final and the National Final in the RDS where we finished 6th out of 7,000 entries.  This year’s school panel will work just as hard and with a little bit of luck hope to be just as prolific!

Success for CBS Primary Once Again!

Last Sunday,February 2nd, the u11 and u13 quiz teams from Mitchelstown CBS Primary competed in the first round of the annual Credit Union quiz.
Only one team qualifies from this event to reach the chapter final, so there is no room for error.Both teams acquitted themselves superbly with our u13s being the outright winners. Congratulations to Ryan Spratt, Benjamin Cooke, Luke Cott and Tristian Power for a brilliant performance. They will be busy over the next few weeks in preparation for the next round and are sure to do our school proud.
Thanks also to Mitchelstown Credit Union for a well organised event, enjoyed by all participants. 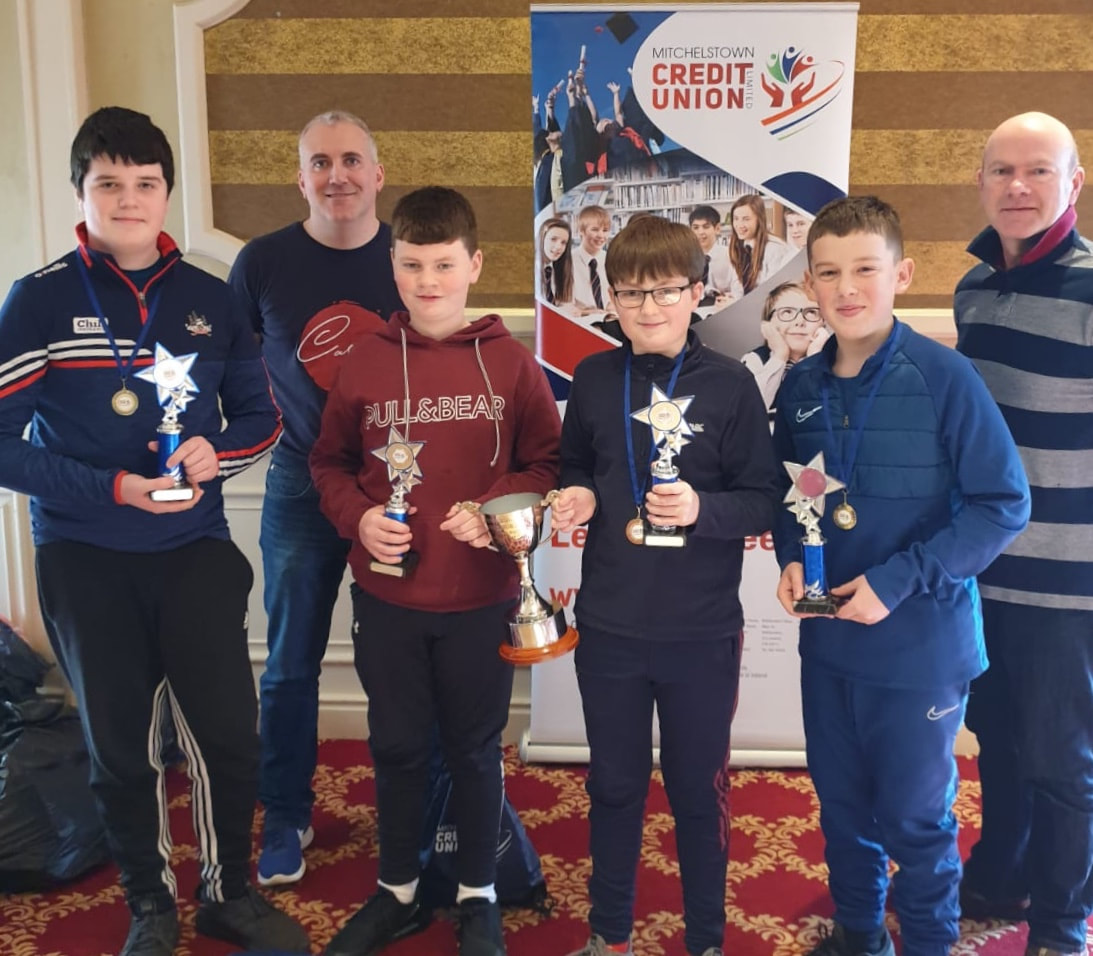 Success at T.O. Park for our CBS Quiz team!

The CBS Primary Quiz Team had  another successful night last Friday. The boys came out on top for the annual Knockadea N.S. quiz which was held in T.O. Park.  Over thirty teams took part and the leaderboard was tightly packed however the CBS team performed consistently to win by a single point.
The team, which won the Ballygown quiz the weekend before, consists of Tristan Power, Ryan Spratt, Ben Cooke and Luke Cott.
We wish the boys the very best in the up-coming Credit Union Quiz. 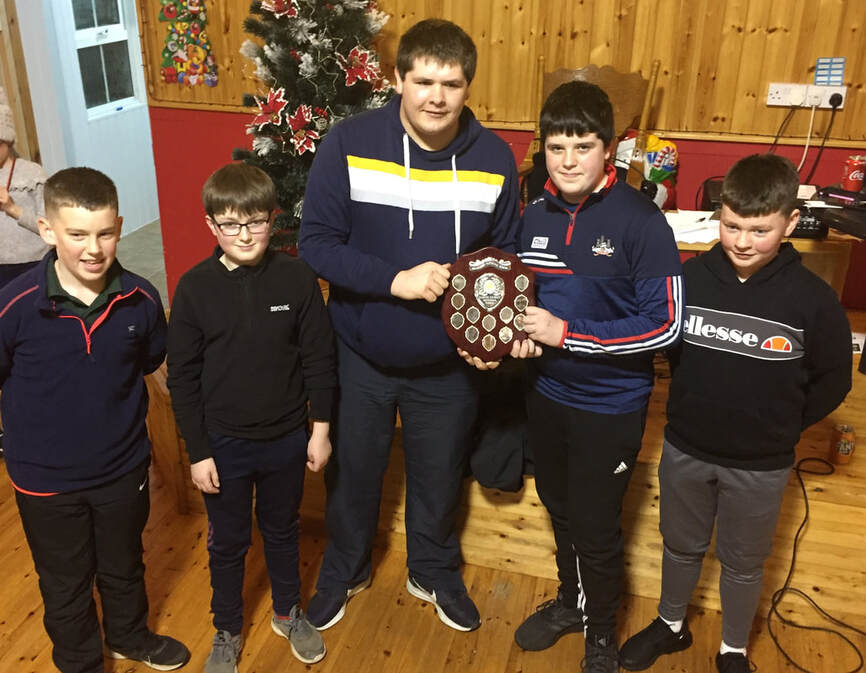 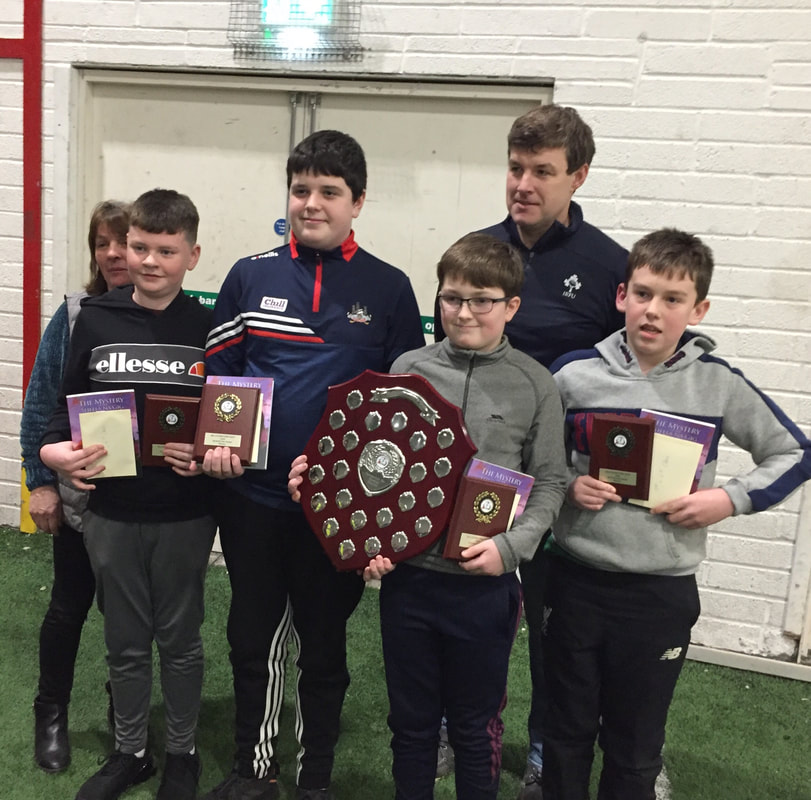 Well done our boys
Tristan, Stevie J., David and Brendan Hurley who swept the boards at the Ballindangan Annual Quiz.
​

Quiz at Castlelyons - 2nd place, - Team - Tristian Power, Ryan Spratt, Luke Cott and Ben Cooke. The boys are doing us proud -
​
Good Luck to all for the next outing, which is this Thursday, 28th November, at Glenbrohane. Good luck teams! 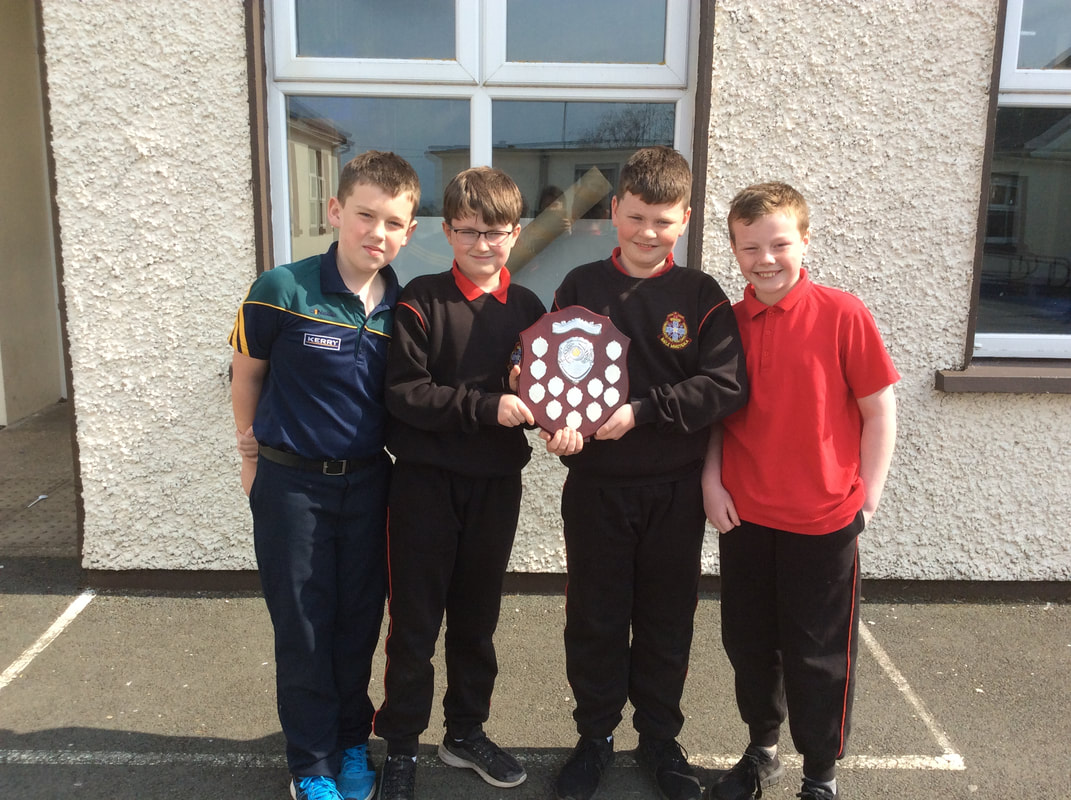 On Wednesday the 10th of April over fifty teams attended Knockadea National School Quiz.. We sent two great teams from CBS,, both of whom ended up in a tie-breaker for first place! Our fifth class team (pictured below) claimed first place in the end by correctly answering the tie-breaker question 'What is a female foal called?' For our two teams to take first and second place was a huge accomplishment. Congratulations boys!

Another win for C.B.S Quiz Team
​Written by Mark Sampson 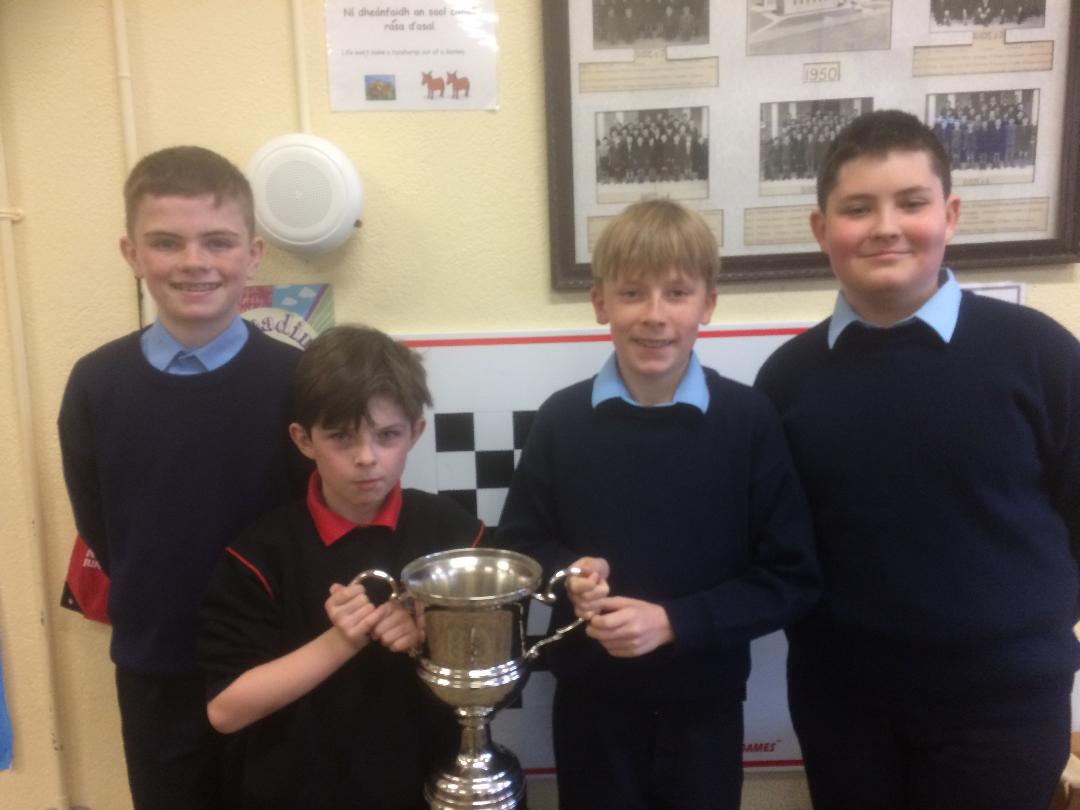 ​On March 7th we sent three teams to Glenahulla for another table quiz. There was more than seventy teams from schools around the area. in attendance. We came away with yet another overall victory, bringing the Bernie Walsh Memorial Cup back to C.B.S Primary. The members on the winning team were Mark Sampson , Eoin Brenock , Kyle O' Regan and Clement Motherway. The other teams involving  Luke Cott , Ben Cooke , Ryan Spratt , Daniel O’ Brien , Eoin Kirwan , Danny Murphy , Tristan Power and Patrick Hanrahan also did fantastic. 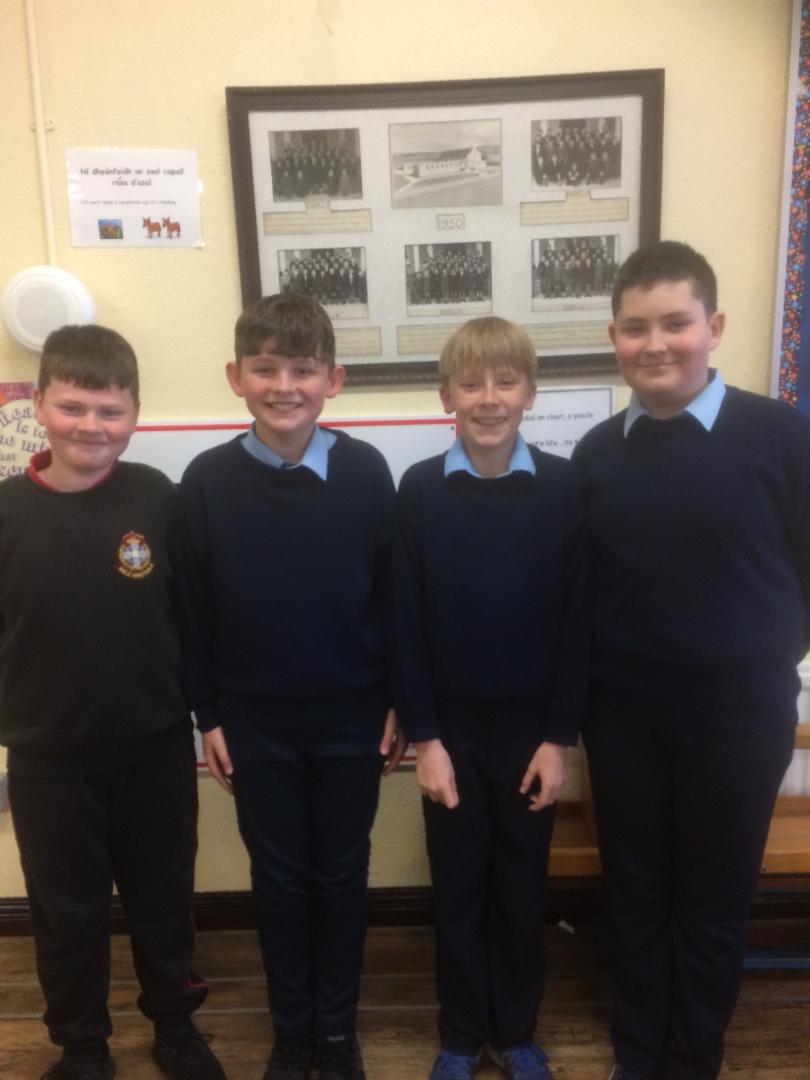 On February 8th we sent several teams to Ballyhooly for a table quiz involving many schools around the area . We came away with an overall victory after answering 72 out of 80 questions correct narrowly beating  Bunscoil na Toirbhirte . The victorious team members were Mark Sampson , Patrick Hanrahan , Clement Motherway and Luke Cott. The winners each won a book voucher and were delighted with their victory.
​

​Having trained after school every Thursday since September the boys went into last Saturday's Credit Union quiz with real confidence. However, as only one team qualifies, the pressure to perform is enormous. They were up against the very best teams from schools in Tipperary, Limerick and Cork. Our u11 team featured Cathal Walsh, Patrick Hanrahan, Mark Sampson and Eoin Brenock and they sailed to victory following a very commanding performance.
It was a very different story for our u13 team. After 12 rounds the adjudicators counted back the scores and discovered that ourselves and Araglin finished level. A tie break round of 3 questions was needed to separate the teams. At this stage it is a question of keeping calm and thinking the questions through as tie break questions are notoriously difficult. It was a tense time for all present . Our boys kept their composure brilliantly and took first place. This was a magnificent achievement for both teams and they deserve enormous credit (no pun intended!).The next round will take place in the next month so the real work starts now. 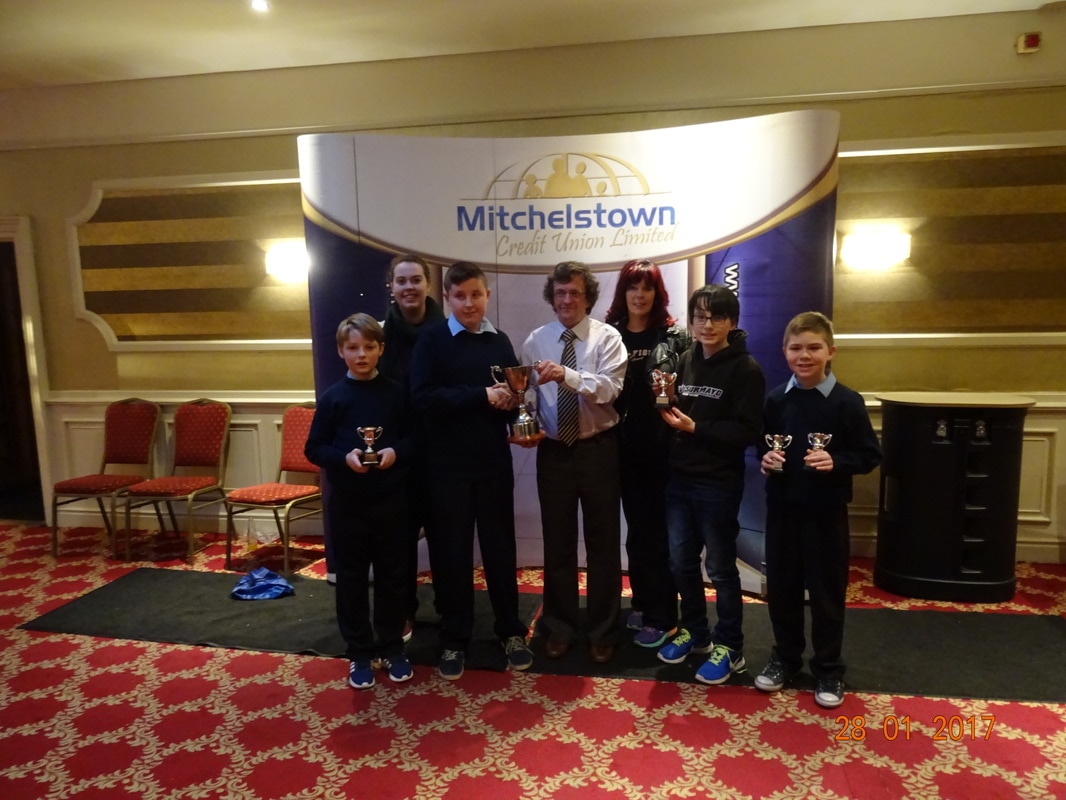